Many people know of Japan’s beautiful kimono these days but fewer have heard of Meisen. Meisen is a kind of Japanese silk fabric. The principle feature of Meisen that distinguishes it from ordinary silk fabric is its price and its texture. To weave Meisen fabric, second grade silk thread is used, which makes its price low and its texture less smooth. This characteristic may initially appear to be negative, but in actuality it has made silk kimono more accessible. Chichibu is one of the major producing areas of Meisen and its fabric is called Chichibu Meisen. 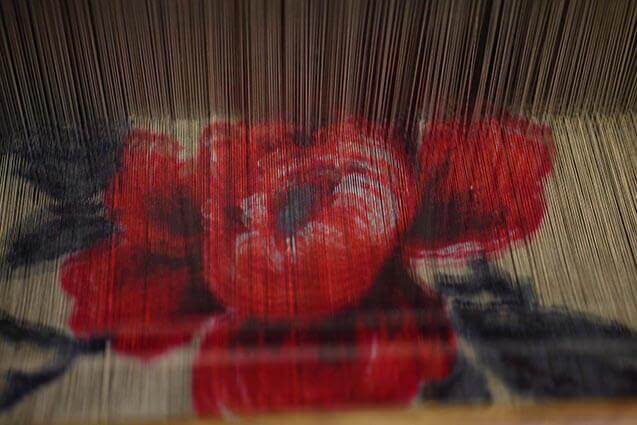 The Chichibu area is very mountainous and the flat plains that are suitable for the rice crop are narrow and limited. The technique of sericulture and weaving, which is said to have been brought to Chichibu before the Common Era, has long maintained the lives of the locals. The silk of Chichibu was well known in the first era of samurai governance (1185-1333). Samurai carried his own flag made with Chichibu silk in battlefields. Later in Edo period (1603-1868) Chichibu silk was mainly used for the official costumes of Tokugawa Shogunate. After the modernization of the nation in the 19th century, the value of Chichibu silk was very high in the world market and it was exported to Europe for the production of silk fabric. 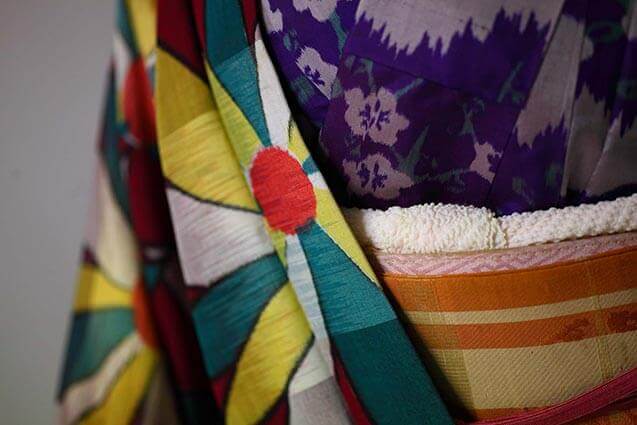 While the first-class thread was for the export, the second-class type was for the locals. As the second-class thread was thick and strong, it was used for working clothes in farm and moderately priced kimono for everyday use. The kimono of Chichibu Meisen was mainly decorated with a striped pattern before a new weaving technique was invented in the beginning of the 20th century. This technique involved printing a design onto vertical threads fixed temporarily with just a few horizontal threads, which were removed when weaving. This technique allowed them to make a reversible kimono with different color variations easily. The process was also time efficient which in turn lowered the cost of production down. There was also a defect as every rose had its thorn. This technique was not suitable to realize small, complex patterns. That said, production houses worked around this limitation and focused on large print designs. Also, designs by overseas designers and budding Japanese artists were adopted, and as a result Chichibu Meisen started to be recognized as avant-garde at that time. In 1920’s and 30’s, Chichibu Meisen became very popular as a fashionable kimono with an affordable price among fashion-conscious people including “modern girls” and students. 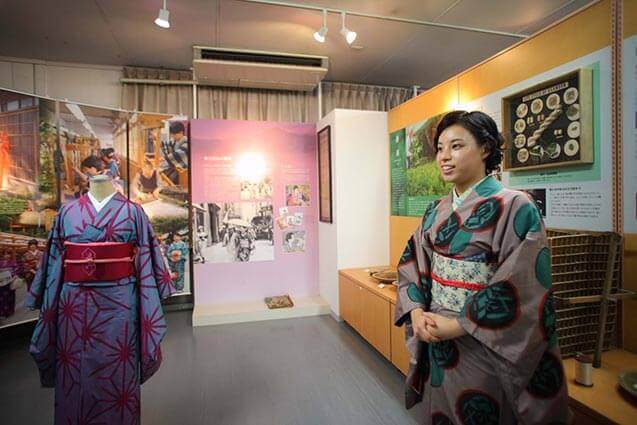 Another characteristic of Chichibu Meisen is that is able to produce a kimono with iridescent color effects. Taking its creativity, fashionable designs, popularity and color into consideration, it could be said that Chichibu Meisen was one of the origins of today’s kawaii (trans. cute) fashion in Harajuku, Tokyo. Recently, as the number of people who wear kimono has declined and there are not many opportunities to wear kimono as there used to be, we hardly found any new kimono made from Chichibu Meisen, but there are many interesting goods made with the silk sold in shops. However, there are many fashion-conscious people and designers all over the world who utilize traditional items like kimono as a form of expression. Fashion design has a bigger international impact than the days of old. So, we are sure that once Chichibu Meisen captivates the attention of the public, it will become a new tradition of Chichibu.

Chichibu Meisen House is in a unique building built based on the idea of American architect, who came to Japan in early 1900’s to create buildings with a fusion of the latest American and traditional Japanese techniques. In Chichibu Meisen House, many pieces of kimono of Chichibu Meisen are exhibited as well as the production process. Even though the explanation is given only in Japanese, you can see and feel Chichibu Meisen. Moreover, there are courses where you can practice the printing, weaving, and dying process.