A great attempt to make a new tradition in the Chichibu area- House of Miyamoto, an old farmhouse –


Chichibu used to be known as one of the biggest silk producing regions in Eastern Japan and as a region of pilgrimage tourism. There used to be many inns in Chichibu region for the merchants and the pilgrims, some of which still remain. The House of Miyamoto in Ogano town dates back 250 years, once a rich farmhouse and now used as an inn, receives only 6 groups a day. The house of Miyamoto has another secret: the current owner of the house, the 12th head of the family Miyamoto, was a sumo wrestler until 2012. He gave up his carrier in sumo because of an injury and came back to his hometown to continue the family business. 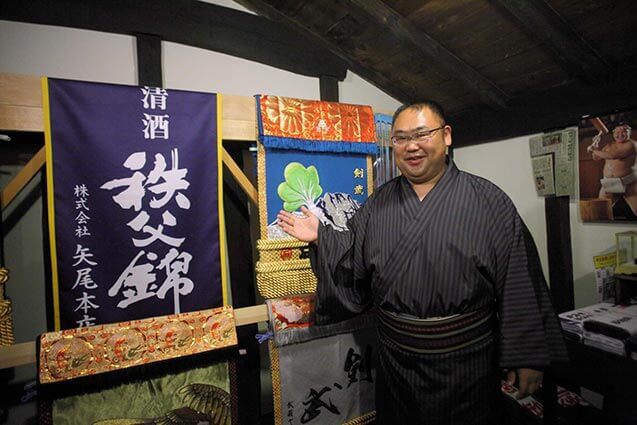 As the house of Miyamoto also receives one-day trippers from 11:00 to 21:00, we only ate lunch here. Before lunch we enjoyed aperitif in Kura (trans. storehouse) Bar in the refurbished storehouse. 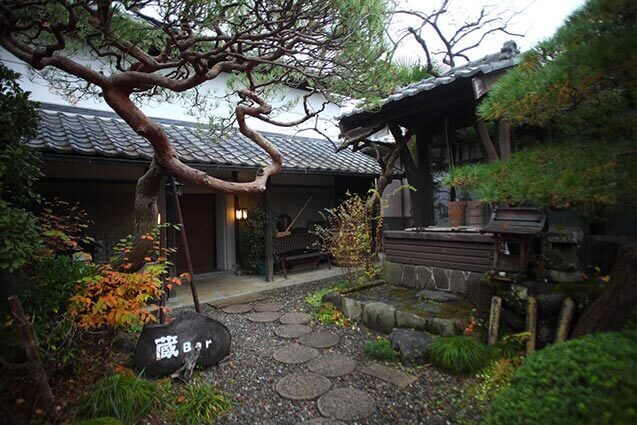 In Kura Bar, 52 kinds of liquors flavored with local ingredients, such as fruits and herbs, are available. All were once taken for medical purposes. We chose three liquors: one flavored with flower buds of fragrant olives; another with Kuromoji, and the third with silvervine. Fragrant olives are said to be good for skin. Kuromoji, a kind of camphor laurel which traditionally is used for toothpicks, is said to be anticavity. Silvervine, which cats like, is believed to work to enhance energy (particularly for travelers). We thought the explanation for this was very cute. Silvervine is called matatabi in Japanese. Matatabi is a single word but if it is parted in two syllables, it becomes mata-tabi. Mata means “again” and tabi means “travel”. So, people who visited Chichibu for their silk business liked to take this liquor as a wish for safe travels before making the return trip. This is an example of the linguistic preferences of the Japanese which can be seen in many cases, even in present days. Japanese people tend to love puns. Sometimes it seems like just a word game but it has a quite serious aspect as well. In Japan there is a belief called Kotodama (trans. the spirit of words), which means that all the words or sounds have power when uttered. So with just drinking liquor of matatabi, people are able to think that they will be granted safe travel back home or to another place. 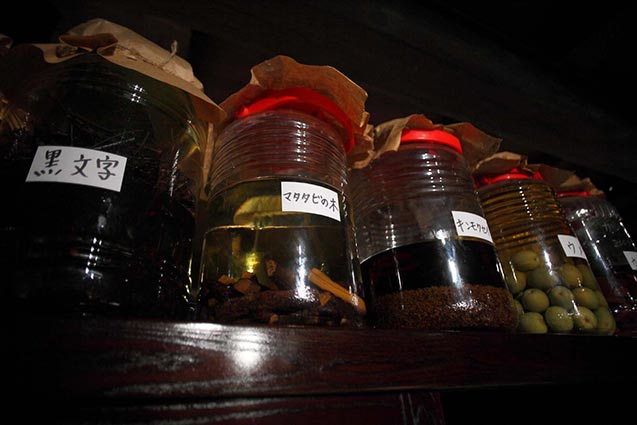 Before getting too drunk, we went to the upper story of Kura Bar to see valuable objects owned by Miyamoto family, among which were sumo related objects (a must-see if you like sumo). There were apron-like cloths with luxurious embroideries called kesho-mawashi in Japanese which sumo wrestlers wear in the introduction ceremony before the tournament, special envelopes in which prize money for a match was kept, the topknot of hair which was cut off when he retired and much more. They all belong to the present owner of House of Miyamoto, who used to be a sumo wrestler. This is another unique charm that House of Miyamoto has. 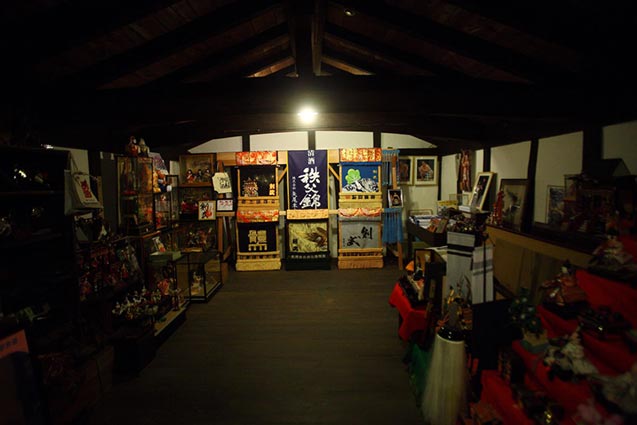 Lunch in House of Miyamoto is huge but the taste is very delicate. The menu includes various typical dishes cooked with local ingredients. All are simple rural dishes. Vegetables and river fish are grilled in a traditional sunken hearth called irori in Japanese. You can also experience the typical dish that sumo wrestlers eat every day which is called chanko at the end of the course! 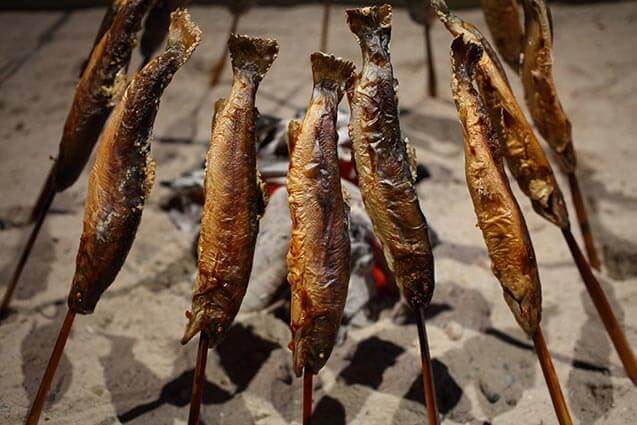 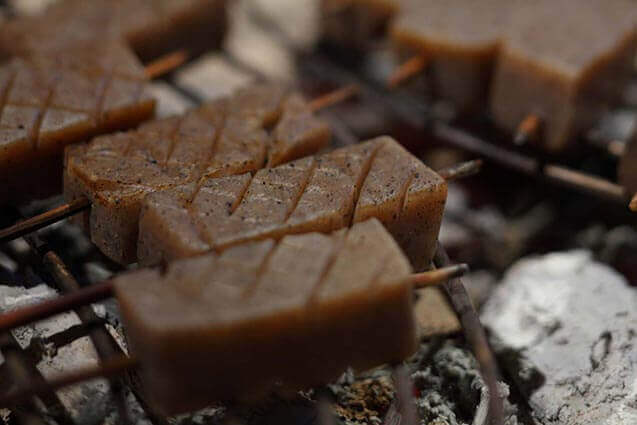 Another building at the House of Miyamoto, separated from the main one, was constructed by a carpenter who specialized in restoring shrines and temples, including the Castle of Matsumoto in Japan. The construction took two years and all the wood used was brought from Hida, the place which is famous for the quality of timbers, about 250 km away to the west. 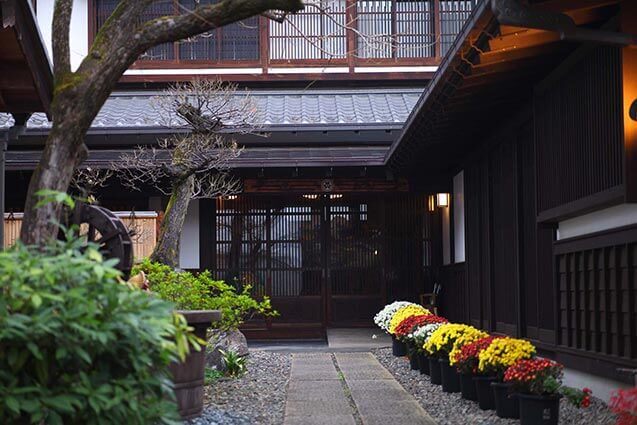 Ogano town, where the House of Miyamoto is located, is situated next to Chichibu-shi and is famous for its kabuki productions performed by the villagers, who do everything from makeup to acting. It has become a tradition of this town and kabuki is played in local festivals. Its history dates back more than 200 years, when a kabuki actor who played in Edo (Tokyo was called Edo until 150 years ago) came back to his hometown and started to teach kabuki to the villagers. And here, another tradition may have started by an ex-sumo wrestler who returned to his hometown. 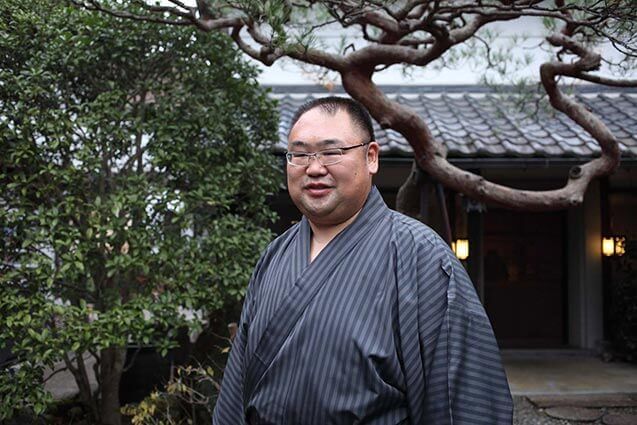