DINING OUT ARITA with LEXUS

Background of the outdoor restaurant open only for a few days 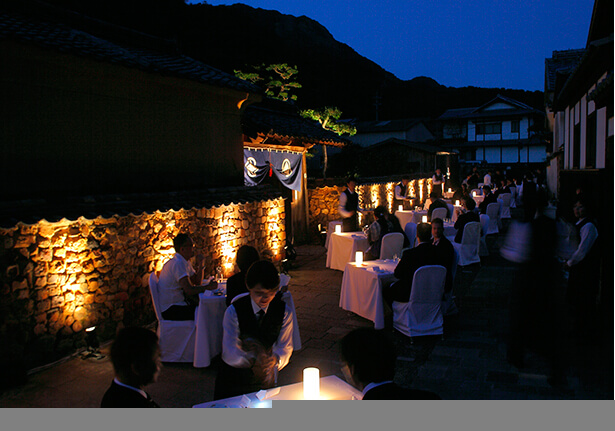 Dining Out is a project that presents the beauty of nature and the appeal of traditional culture in various regions across Japan through outdoor restaurants open for only a few days.
The seventh Dining Out event was held in the town of Arita in Saga Prefecture from September 12th to 14th .
The venue for the event was a quaint alley behind a part of the famed Tonbai Wall, which surrounds the Arita potters’ district.
The Tonbai Wall is built from the discarded firebricks (“tonbai” in Japanese) of climbing kilns, as well as old firing tools and pottery fragments, cemented together with a layer of red clay. The potters of the 17th century Edo Period who lived on these quiet streets are said to have built the walls around their homes and workplaces to conceal their pottery techniques from competitors.


Aspiring for the ultimate marriage between cuisine and tableware

The theme of the seventh Dining Out event revolved around finding the ultimate marriage between cuisine and tableware in the birthplace of Arita porcelain, with its 400 years of history.
Dining Out’s executive producer Tomoki Oorui commented that he “wanted to make this event one that would allow ceramic and culinary artists to combine their techniques and creative sensibilities to bridge the next one hundred years of Arita.” Singled out as the only possible choice for this task was one of the most famous chefs in Singapore, André Chiang of Restaurant André. 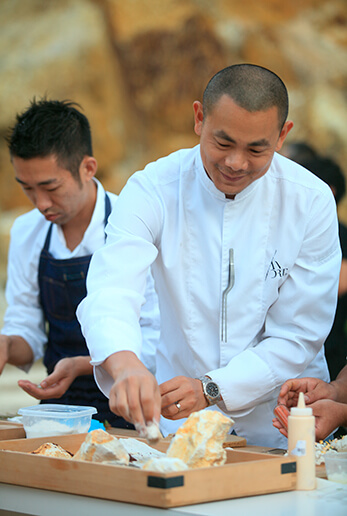 Admiring the work of ceramic artists since his youth, Chef André has made tableware used in his restaurant himself, using a kiln borrowed from a friend. By sharing his “octo-philosophy” of eight culinary elements (unique, pure, salt, south, texture, memory, terroir, and artisan) with Arita ceramic artists, he was able to achieve an exquisite marriage between food and tableware on a completely different level. This is the story behind the creation of those ten dishes.


The marriage between André Chiang’s octa-philosophy and Arita porcelain 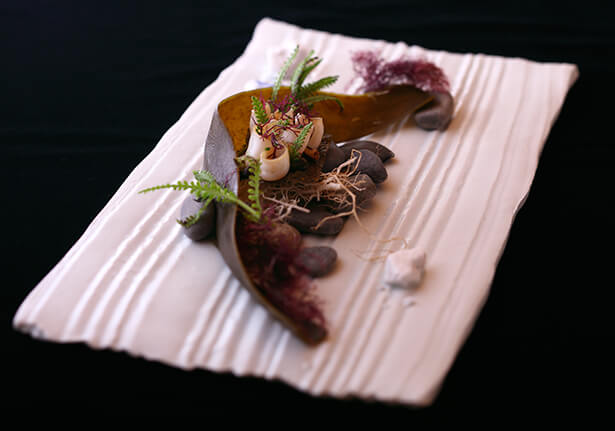 As a prelude to the octo-philosophy, a plate was created to portray a scene from the town of Arita, where pottery stone and fragments can be found in its clear streams. In order to depict these glimmering fragments of broken pottery washing down the river (called “benjara” in the local dialect), Kozaburo Harada from Zuiho Kiln used a technique called “itazukuri” to carve grooves in the clay, and then shave it into a thin, board-like plate. Dead stock pieces that had been hidden away in storage for 50 years were then crushed and affixed to the plate. On this plate, seaweed and abalone were arranged to seem as if they were floating downstream, to creating a pure dish with salty flavors from the ocean as its only seasoning. 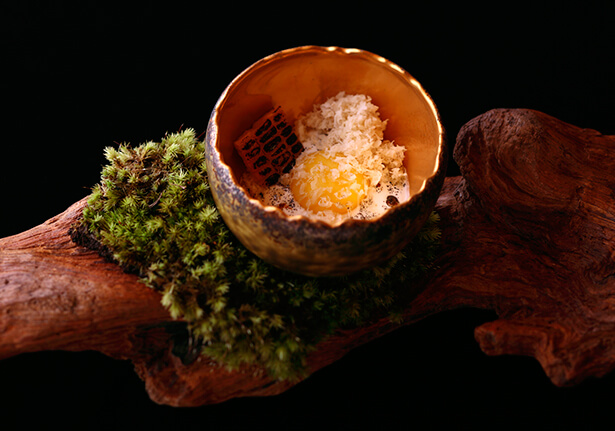 Chef André describes “unique” as dishes that present familiar ingredients in unusual combinations or using cooking methods not ordinarily used. He asked the ceramic artist to make the inside and outside of the bowl differ dramatically. When Hiroyuki Tokunaga of Tokko Kiln heard the dish was to be served on a tree branch, he decided to use several types of glaze on the outside of the porcelain surface for a feeling of earth and moss. The inside surface was finished in gold. The combination of chilled corn custard, warm corn cream, and aromatically grilled corn was accented with almond purée and horseradish to create a fusion of sweet, spicy, and mellow flavors. 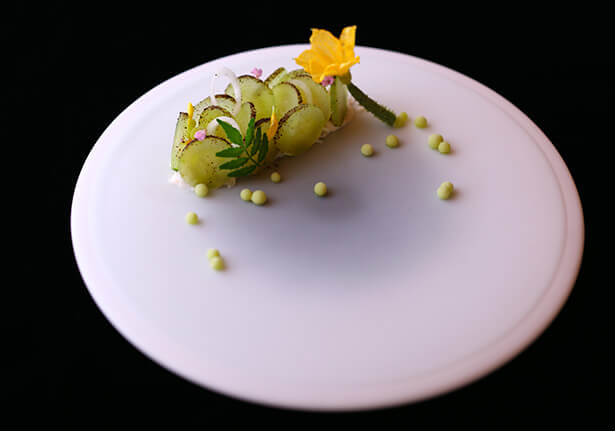 Chef André uses the philosophy of “pure” for cooking that uses no seasoning and only minimal heat to bring out the natural flavor of the ingredients. He asked for the tableware to resemble a pure white sheet of paper, upon which a single drop of ink has fallen. To create this plate, Hirofumi Yamamoto of Yamahei Porcelain first decided to use porcelain clay with a high level of transparency. Fine-grained with a striking degree of whiteness, this clay was the only choice for expressing the concept of “pure,” he noted. First applying a glossy glaze, the plate was sandblasted after firing to create a more matte finish. This fragrant dish features succulent cucumbers on a bed of crab, sea urchin, fromage blanc, and chamomile tea jelly. 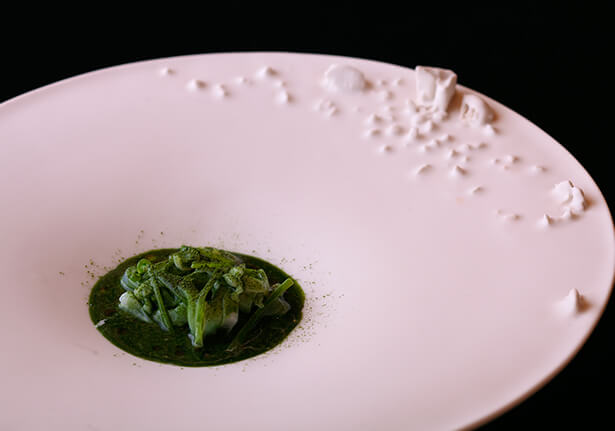 Chef André describes his philosophy of “salt” as cooking that allows you to taste salty flavors without actually using salt. Although he normally uses ingredients from the sea for these dishes, he wanted to combine potatoes and shellfish to represent the Arita region, which is blessed by both sea and mountains. With a request from Chef André for a plate that shows the landscape of Arita, Masao Fukuda of Fukuju Porcelain created a piece that expresses the natural topography of Arita. Pieces of porcelain clay were affixed to the base plate to depict the scenery of the region including terraced rice fields and rugged mountains. Lightly braised squid and potatoes combine in a perfect harmony, pulled together with the salty flavor of kombu. 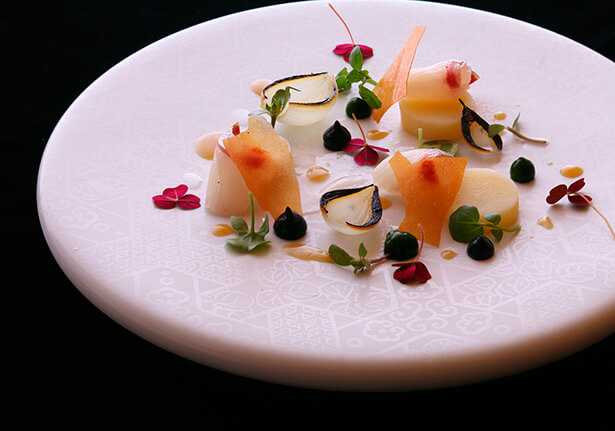 The element of “south” is to express the fresh ingredients, acidity, and serenity of Southern France. Having lived there for 17 years, the time he spent in France serves as the orginal inspiration for Chef André’s cooking, and is always at the root of his creations. In a similar fashion, he wanted the tableware for this dish to look back on the 400 years of Arita tradition, while looking ahead to the next 400 years. Upon hearing this, Yoshiyasu Harada of Kichiemon Porcelain decided to feature Arita’s traditional iro-nabeshima pattern, using the same white glaze in both glossy and matte finishes. Umami flavors extracted from mushrooms, kombu, and stock fish are brought together with a vinaigrette dressing. 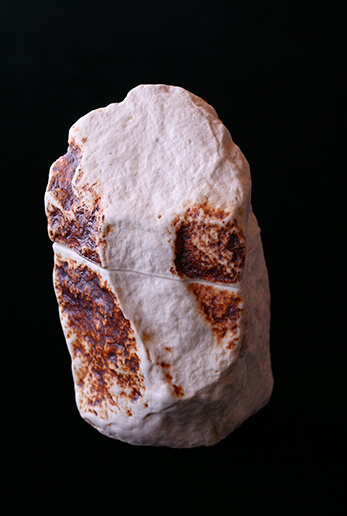 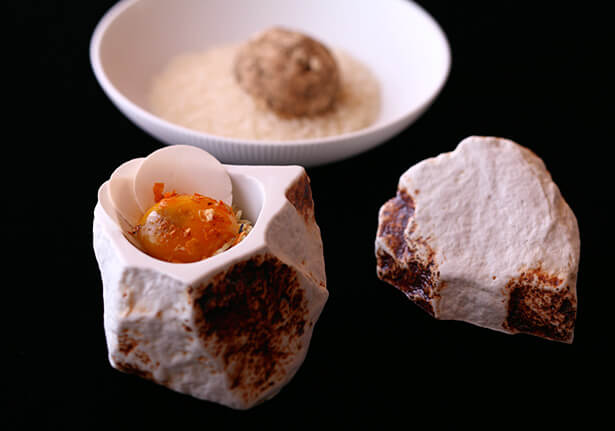 “Texture” is described by Chef André as a way of expressing delicious flavor by contrasting different tastes and textures. When thinking about the “texture of Arita,” he imagined the landscape of the Izumiyama Quarry that once supplied the raw materials for creating Arita porcelain. When the lid is placed on the bowl, it looks just like a stone. Shinji Terauchi of Riso Porcelain created this hollow vessel by slip casting the sludge for the piece. He applied silver mica and copper mica to the surface to give it a red color and a feeling of rusted metal. At first glance, the dish appears to consist of white truffle risotto. However, this creamy and richly aromatic creation does not use cream, rice, or white truffle. 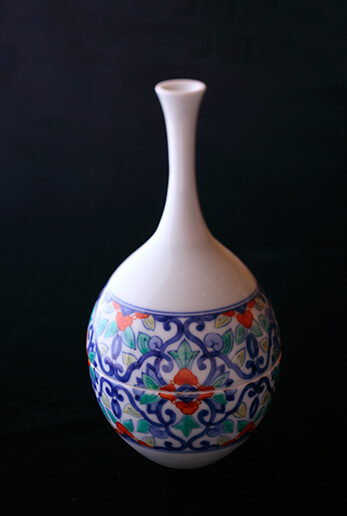 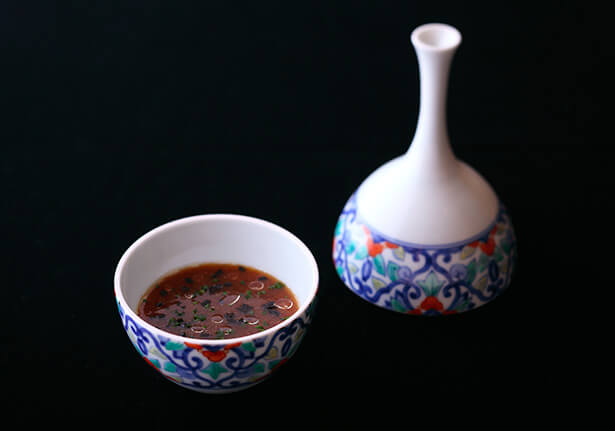 For Chef André, “memory” involves cooking that allows him to return to his beginnings and early memories in the culinary world. During his time in Southern France, his first recipe to appear on the grand menu at the restaurant where he was being trained is the one that he has continued to make without any changes. For the tableware for this dish, he asked for something shaped like a flower vase, emphasizing the beginnings of Arita porcelain. Receiving this order, Shinji Terauchi of Riso Porcelain created a vase by using a mechanical potter’s wheel and pressure casting. On the surface, he painted a traditional Arita nabeshima sarasa (chintz) pattern. When the lid is removed, a steamed dish similar to Japanese egg custard appears. Except that this creation is made from fresh foie gras which is whipped while being cooked to bring out a light texture. 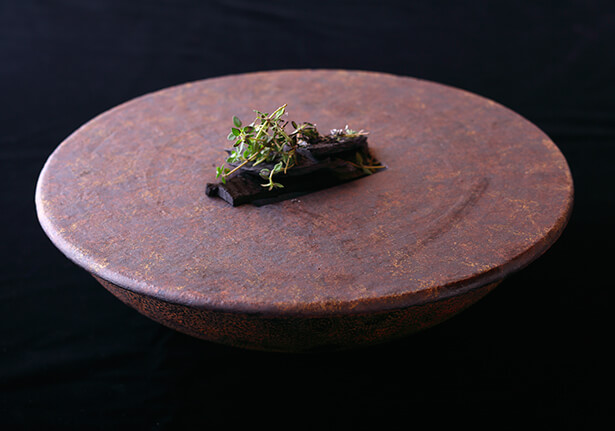 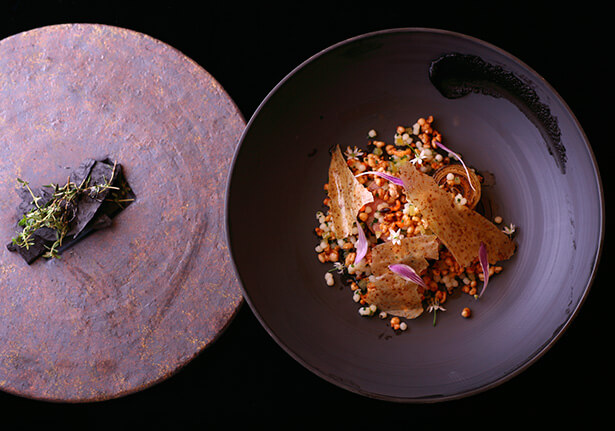 Behind the idea of “terroir” is cooking that is rough and manly, rooted in the land. Chef André took the delicateness hidden within the strong flavor of Tomo-sankaku Saga beef, removing the fat and combining it with grain and potatoes to balance the fat and sweetness. The bowl was covered with a fire-resistant lid, on top of which a smoldering piece of charcoal and thyme were placed. This creation was taken like this to each of the diners’ tables. Yasutaka Suemura of Anrakugama Kiln created this lid, as he is the only potter in the world of Arita porcelain who makes fire-resistant pieces. Blending his own unique clay and glaze, this piece shows new possibilities for Arita porcelain. 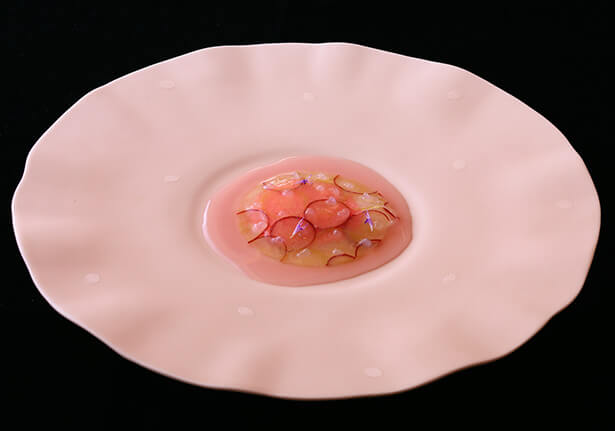 As a bridge for moving between the main dish and dessert, Chef André presented a dish to enjoy the faint sweetness and tartness of seasonal red fruits. The bowl was to have a delicate nuance. Hearing this, Hirofumi Yamamoto of Yamahei Porcelain created a piece resembling a lotus leaf. He applied a glossy light pink glaze, which was sandblasted after firing to reduce the glossiness. The pattern of tiny white flowers modeled after lotus blossoms was painted on with mica, so that it could still be seen in the outdoor lighting. It provides the perfect match for the faint flavor of the dish that almost seems to disappear once it reaches your mouth. 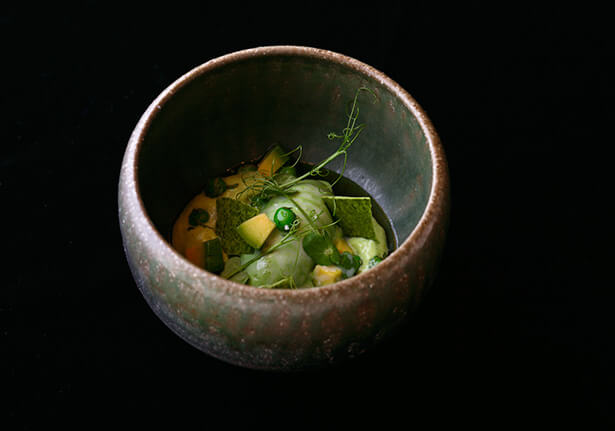 The philosophy of “artisan” is cooking that shows respect to food producers and artisans. Chef André hoped that this dessert of cold ice cream topped with hot matcha foam would be enjoyed by taking the bowl in both hands and drinking from it, similar to the traditional Japanese method of drinking green tea. The event’s lone piece of earthenware was created by Eijiro Tokunaga of Tokko Kiln. Since Chef André requested that the piece be dark green, he used a limestone and iron oxide-based glaze. Then, by firing the bowl together with charcoal inside a fire-resistant box, carbonization occurs when the box fills with smoke. Compared to normal gas-firing, this method can be used to create deeper color tones. The mutual stimulating collaboration between Arita porcelain ceramic artists and Chef André thus came to a close with a lovely spot of green tea.